What would you like to see in the new series?

Talk about the most awesome show in the world, SWAT Kats: The Radical Squadron.
Post Reply
53 posts

I can see Feral liking the SWAT Kats as the show made it clear he (sort of) came to grudgingly admire them, so that's within the realm of possibility, but why would Callie suddenly hate them...?

As far as corruption goes, we've had Steel, and there some insinuations (but nothing concrete) about Meece in Chaos in Crystal, and Conklin in Caverns of Horror was definitely crooked. And as for organized crime, we did see catnip smugglers in The Metallikats and then there's the Metallikats themselves, who are in fact mobsters. So I think what you mean is you'd like to see more (or at least more overt) corruption and organized crime.

That's a big ten-four right there.

SwatKatsFan1 wrote:-New characters that are either civilians, enforcers, or politicians.

The show technically already did that. Each episode introduced new supporting characters (almost always one-shots, though). I take it, though, you mean new characters who'd become recurring ones like Professor Hackle and Dr. Sinian?


SwatKatsFan1 wrote:-A main villain for each season. You know, like how Arrow has Damian Dark and Flash has Zoom.

I agree to some extent. Although the original SWAT Kats wasn't really designed for season-long arcs, I kind of think a new show would benefit from it.

1. Callie is the deputy mayor of MegaKat City and every time the SWAT Kats are in action, they cause property damage meaning that she'll have to do a lot of paper work and Manx would raise taxes meaning that a huge cut would be taken out of her salary. I know Callie's not greedy unlike Manx, however Callie would also consider the SWAT Kats to be reckless like when T-Bone was willing to fight off that exhibit the Past Master brought to live in "The Past Master Rings Twice".

2. Yeah, I like to see more organized crime. The only gangsters I made up where Charlie Tan, Moxie Fontaine, The Yakuza, Draco Fontaine, and Lola Fontaine. The only corrupt enforcer I made up was Arnold Thomspon similar to how you made up Commander Ashland for The Radical Beginning

4. Yeah, I mean new characters who'd becoming recurring ones like Professor Hackle and Dr. Sinian. I made a loudmouth, fast talking, and arrogant enforcer named Jerome Weston and a mechanic engineer for Puma Dyne named Rupert Ramirez who knows who the SWAT Kats are and works with them.

The biggest one for me is I hope they bring back Mook Animation. Their animation for some episodes in the first season and the entire second season made the show for me. I thought they brought out the best in the show.

Less monster of the week episodes definitely. The best episodes were when the Swat Kats were forced out of the jet. And just rely on their own skills.

Give the female characters more to do. Episodes centered on Callie and Felina would be very enjoyable for me.

Bring back Madkat. I just love the whole creepy Freddy Krueger aspect of his character.

And finally can we dive further into Chance and Jakes lives. Who are there families etc.
0 x
Top

Now that's a tough question to answer for many great reasons. First thing I want to see is an awesome intro. Obviously most of their regular enemies needs to return for this to work. We do need more Felina Feral in the actual show. More original possibly crazy gadgets & projectiles the SWAT Kats gets to use. More light on both members of the SWAT Kats' past would be nice. I really would like to see an Dark Kat origin episode. There is so much mystery about their greatest enemy that they must do it. More vehicle variety this time around would spice things up. I want some crazy exciting stories in these episodes to blow my mind. This show should have just as much potential as the original show. There is so many ways to go with these characters to keep coming with amazing stuff.
2 x
Top

Perhaps it could be revealed that Commander Feral was a wrestler at one point in his past.

Imagine a scene in which Feral, and possibly some of his troops, are cornered by bad guys. The situation looks hopeless. But Feral decides he's just not going to succumb quietly. His old training just may save the day. In a daring and scene-stealing move, he lets out a mighty roar, tears his shirt off (revealing himself to be totally ripped) and proceeds to body slam and pulverize all of his enemies using a variety of wrestling tactics.

Imagine the Swat Kats witnessing this spectacle, completely stunned and unaware that Feral could do this. Meanwhile Feral himself walks away satisfied with his handiwork, happy that he still has it in him.

That makes me think of the live action Speed Racer movie, specifically the Ninja (Nonja. Terrible what passed for ninjas in that movie.) that tried to punch Pops. Pops catches the fist, spins the Ninja in for a one armed chokehold (And Pops is a good couple of feet taller and at least as much wider than the Ninja, so the poor guy already knows pain is coming). The Ninja looks at Pops' hand and sees a wrestling federation championship ring, and just says "uh-oh" in a clear "mistakes have been made" and "this won't end well" tone.

I'd love to see some random goon try something like that, maybe an assassin in Feral's apartment. He fails, lands hard from being Punched Across the Room, and Feral's championship belt lands on the assassin's lap. Cue epic "Oh crap/FML" face, maybe a quiet whimper, followed by Feral cracking his knuckles and/or neck, with a grin that says "Hello, stress toy".

Feral definitely needs some moments where he gets to shine and be the hero of the day. Maybe the SKs stop the big bad plot, but Feral caught the escaping villain on his own. Maybe he stops a big problem without their help at all due to being in the right place with the right gear. At the very least, let him save the heroes once or twice. You don't get to be a Commander without being good at your job.

Same for the Enforcers. Just once, let them be in a place where choppers and tanks are the right tools for the job. Some sergeant spots a threat early, calls it in, and they arrive in time and thwart Viper. Even if he escapes, they kept him from getting what he was after, forcing him to try something else (Maybe something bigger, and it turns out his backup plan was worse than the original, justifying the SWAT Kats showing up.) The Enforcers didn't screw up, and may have saved lives, Viper just had another plan that didn't need what he was trying to steal. Neither party is less awesome for their respective wins.
2 x
Top

Probably Upgrades on the Past and Also New Gadgets and Methods of Dispatch and Such.

Many have already said what I wanted to say, so let's see, what other ideas I could bring up...

Well, remember the "old" couple that served Dark Kat in one episode, setting themselves up as victims? Surely the SWAT Kats have accidentally harmed a lot more people, and it'd be nice if this was addressed.

Like I've mentioned in another thread, world building would also be nice.

Bringing back unused ideas too, like aliens that turn out to be humans.

Or characters we've never seen before, like Feral's brother/Felicia's dad. Maybe he works in another city or state, but he could always visit.
0 x
It feels so good to be bad!
Click above & enjoy
Top

Darker wrote: ↑
Thu Jul 18, 2019 11:17 pm
Well, remember the "old" couple that served Dark Kat in one episode, setting themselves up as victims? Surely the SWAT Kats have accidentally harmed a lot more people, and it'd be nice if this was addressed. 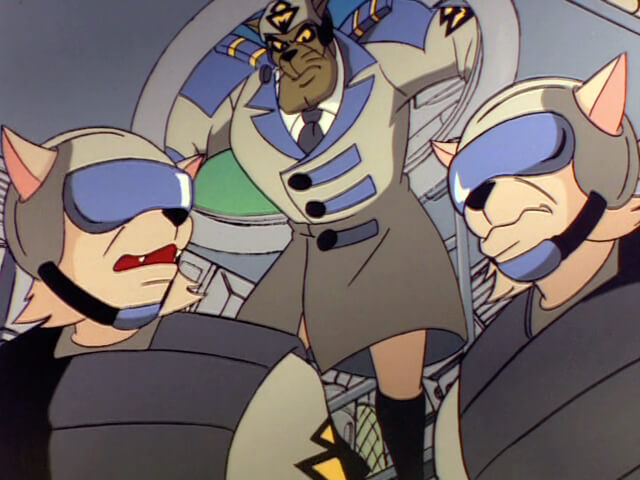 When Razor's Scrambler Missile makes Hard Drive lose control of the Behemoth, it drives right over Feral's tank. Feral bails, but we don't see the other two guys get out... 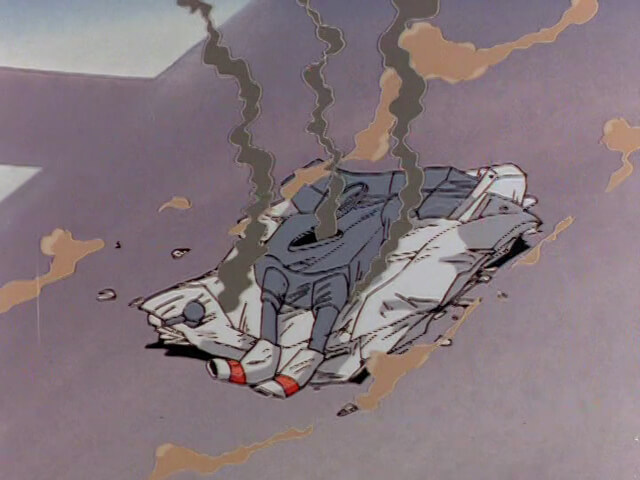 This is never brought up. Not even by Feral in his tirade against the SWAT Kats. Even though you'd think indirectly getting two of his men squished would be the first in his list of charges against the vigilantes this time around.

And in the script and storyboards, it was originally the main Enforcer sergeant (identified as Sergeant Talon in the script and storyboards for Destructive Nature) and another, nameless sergeant who were in the Peacekeeper, but since he shows up alive and well in the script later on despite having gotten killed, someone somewhere realized there was a boo-boo, so the crew of Feral's Peacekeeper got changed to two generic commandos and everyone's favorite Enforcer sergeant was spared.

...they still forgot to change Gary Owens' dialogue, though, so he still addresses the commando who speaks as "Sergeant."

Anyway, TLDR, the SWAT Kats have (accidentally, indirectly and unintentionally) gotten someone killed before, and the episode pretty much just glossed it over. To be fair, Razor had no way of knowing the path the driverless Behemoth would take, but still, some acknowledgement over his role in getting those two dudes crushed would've been nice. Maybe not on the level of his moping in Razor's Edge, but still.
1 x
R.I.P. Gary Owens (1936-2015)
Top I would like to see longer running plots that might take several episodes to fully realize, also more character background. Like showing more of the Kats home lives, and flash back err episodes for when Chance and Jake first met, their Enforcer training days, or when the where little kits in school.
1 x
You search and search for something, never realizing it is within and always has been. You can not find it, you can not understand it, you simply accept, and believe, and it will grow.
- Heretic's Faith, Randall N. Bills
Top
Post Reply
53 posts