Talk about the most awesome show in the world, SWAT Kats: The Radical Squadron.
Post Reply
66 posts

MoDaD wrote:Another question I've always had that I don't think was ever explained was why in Bride of the Pastmaster a time vortex opened up that forced the SWAT Kats to travel back in time to the Dark Ages?

To quote from my review of The Pastmaster Always Rings Twice:

"This little phenomenon is “explained” (or at least hinted at) in “Bride of the Pastmaster”: That whenever the Pastmaster opens a time vortex, similar portals open in all time periods, all leading to where the Pastmaster is." 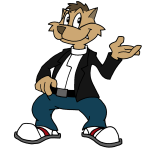 Let's take a look at another scientist: Dr. Lieter Greenbox.

When looking at the episode Unlikely Alloys (the final episode of SWAT Kats), I think it's undeniable that he willingly merged with Zed and thus becomes a menace (not like Dr. Street who needed to be bitten by the Chi-Kat-a's in order to become one). In the dialog between Zed and him that follows it's clear that he was in control when grabbing the laser satellite and destroying the mountain. Not to mention that he almost fired the beam at Megakat City. Performing these actions makes him a villain just like Dark Kat or Dr. Viper from my point of view.

So, what happened to him after Zed was destroyed?
Was he convicted for his actions? (Don't know if his voice could be heard outside, but Zed's replies probably have been ("Zed has been united with its creator."))
But in case it's not evident to the Enforcers that Greenbox was in charge, did the SWAT Kats cover for him for some reason, blaming the Metallikats for it such that he's able to create another invention leading to the next big disaster?

What was going on inside of him after this?
Did he just feel bad, asking himself what suddenly got into him?
Or did he actually find pleasure in his villainy actions?

(Now I'm wondering, why do scientists almost only cause trouble with their work in these kind of shows? Can't these guys invent something that can't be misused to wreak havoc for a change?

And why are mayors in most cartoon shows incompetent and/or greedy?

Mr. Goodkat wrote:Now I'm wondering, why do scientists almost only cause trouble with their work in these kind of shows? Can't these guys invent something that can't be misused to wreak havoc for a change?

Don't blame the scientists. I'm sure it doesn't matter what they invent. No matter what it's intended for, it's going to be misused. The villains will find a way.

Hackle's (revolutionary) mind transfer process - Completely non-military. Gave us the Metallikats.
The Gemkat 6000 - Just a diamond mining machine and nothing more, but it turned Rex Shard into a monster.
The Macrobots - Originally non-military, intended as exploration vehicles, but weaponized by Pumadyne. Then stolen by the Metallikats and used to wreak havoc.
Kat Sat 1 - Intended for peaceful exploration of space, and it brought back a plague of Ci-Kat-A.
The anti-weapon scrambler - Since it was invented by a scientist working at Pumadyne, it clearly was made with military purposes in mind, but I'm pretty sure they still didn't intend for it to be used to rob trains.
Viper Mutagen 368 - Intended to solve blight and deforestation. Gave us Dr. Viper, and, had it been implemented on a large scale, it would've given us a plague of half plant, half snake monsters.

But non-peaceful things have been misused just as often. In addition to the anti-weapon scrambler and weaponized Macrobots, let's not forget the Behemoth and the Blue Manx. Progress is fraught with danger. Everything can be potentially misused. Hackle could make an automated butt-wiping machine and Dark Kat would find a way to turn it to his evil purposes. So they can either accept that nothing is without risk (especially in Megakat City) and charge full speed ahead into the undiscovered country, or they can simply do nothing, invent nothing, and never try to improve or innovate at all, ever, which is the only other alternative, really.
3 x
R.I.P. Gary Owens (1936-2015)
Top

Kooshmeister wrote:The Gemkat 6000 - Just a diamond mining machine and nothing more, but it turned Rex Shard into a monster.

You know what I mean!

Mr. Goodkat wrote:Now I'm wondering, why do scientists almost only cause trouble with their work in these kind of shows? Can't these guys invent something that can't be misused to wreak havoc for a change?

Don't blame the scientists. I'm sure it doesn't matter what they invent. No matter what it's intended for, it's going to be misused. The villains will find a way.

Thanks for writing this extensive list, Koosh. I have a bit of a guilty conscience right now as I didn't mean this question to be taken too seriously (which I tried to underline with the

at the end). It's actually all these inventions which are triggering the events in quite a lot of episodes and without them they probably would be terrible boring as T-Bone and Razor wouldn't have much to do.
Same thing would happen if Manx would be an absolutely competent and modest mayor, btw.

Hackle could make an automated butt-wiping machine and Dark Kat would find a way to turn it to his evil purposes.

I'd love to see this one.

EDIT: Dark Kat: "With this device I'm gonna wipe Megakat City out of my way! And this time not even these meddling SWAT Kats will be able to stop me. I'll just wipe them away too. Muahahahahaha!"
2 x
Running Kat (fan game) | War Games - Illustrated SK Story | War Games - Making of | SK-SNES-Animation | My SK related music
Top

One item that I've always been curious about comes from The Ghost Pilot. There's an aircraft carrier that's being used by the Enforcers to house the Blue Manx Jet, which is odd as Enforcer Headquarters has always been shown to be where Enforcer aircraft are kept and deployed from. I also don't think there's ever been any evidence of an Enforcer Navy shown.

The carrier itself seems to be decommissioned and not in actual use, which makes me wonder if the aircraft carrier is a Mega War II relic that was purely used as a historical site to pay tribute to the past for the christening of the Blue Manx Jet event, especially considering the jet's namesake and the Mayor's relation to it (the Blue Manx being the famous war hero pilot). The only major obstacle I see is that the aircraft carrier is significantly more technologically advanced than the bi-plane era fighters that were shown to be used during Mega War II, by about 30 years if a World War II parallel is to be drawn.

So, I suppose the unanswered question is: why is there an aircraft carrier docked in Megakat Bay, who owns it, and what was/is it used for?
0 x
Top

MoDaD wrote:So, I suppose the unanswered question is: why is there an aircraft carrier docked in Megakat Bay, who owns it, and what was/is it used for?

I want to beleave that the Enforcers have a naval force (just like in War Games fanfic). If a crisis hits by ocean, the aircraft is proof enough they are prepared for it.


Prettyshadowj26 wrote:I have an unanswered question how does Dark kat first met the ninja kats from the episode Razor's edge it's so weird

Maybe (and probably) they are just well trained followers. Except for The Wrath Of Dark Kat, Dark Kat always seeks cooperation with someone else (Dr. Viper, Hard Drive, Dark Callie...).
1 x