The concept of SK Revolution

Talk about the most awesome show in the world, SWAT Kats: The Radical Squadron.
Post Reply
35 posts

Actually, an Enforcer spinoff would be pretty cool. Felina can have her own show.

Lets just forget the SWAT Kats revival altogether and go with an Enforcers spin off instead.

Why not do both? Make Revolution, then follow it up with an accompanying series about Feral and Felina modernizing the Enforcers to make them competitive with the SWAT Kats.

I find it interesting how many of us are showing love for the Enforcers, despite their presentation on the show. The series was meant to be a power fantasy in which the SWAT Kats not only defeated supervillains, but thumbed their noses at authority and got away with it. Anyone who's had a mean parent, teacher or boss can relate to our heroes regularly showing up Commander Feral--can't they? Maybe not, because several grownup fans have come to sympathize with him, seeing him as a flawed but dedicated cop who does the best he can without the SWAT Kats' whizbang technology. (Also, Megakat City is just lucky that the SWAT Kats never abused their power as highly-armed vigilantes.) I actually like Kooshmesiter's fanfic idea of having the series end with the SWAT Kats and the Enforcers working together.

1 x
"Saturday is usually my morning to sleep in."
Top

Kooshmeister wrote: IMO, the hacker, rather that somehow stumbling across their hideout (what would such a still computer expert be doing in a junkyard, anyway?), have her be someone the SWAT Kats catch while she's in the employ of another villain. Say, Dark Kat. Or perhaps Dr. Viper needed someone with her kind of technological expertise for his latest caper, as things go more high-tech and he, a biochemist, knows little about computers and machines beyond the basics. Or maybe she's under the thumb of Hard Drive who is trying to mold her into his protégé and she wants out. Upon being caught, she offers to help the SWAT Kats defeat whoever she's working for, provided they let her go and don't tell the Enforcers about her. Seeing that she's genuine, and wanting to save her from a life of crime while she's still young, they do so, with the episode ending with T-Bone, ever the doubter, wondering if they did the right thing, and there being some question about whether she really was genuine, or just selling her boss out to get off/get ahead.

Wait - would an ankle bracelet really be effective on Hard Drive? That seems like the last thing that would stop him.

It would be kind of fun to see him get captured and relegated to an institutional setting, having to trade in his surge coat for a straitjacket.

Anyway these are some really good ideas - a hacker character that switches sides. There would just be the issue of the character being able to earn the Swat Kats' trust. I could imagine T-Bone being more reluctant, suspecting that they could flip a second time.

I was hesitant to entertain the idea of introducing a character like this at all, however the Swat Kats can't realistically do everything by themselves. They are also helped by other characters such as Professor Hackle.

In fact, what if the hacker is recommended to them by the well-meaning professor? This could open up some other possibilities. Let's say that the hacker is very competent and effective, but quirky and difficult to work with. Maybe they are neurotic and paranoid, or maybe they are immature and fawn over the Swat Kats far too much for comfort. Whatever the case, they are good at what they do. The Swat Kats decide the benefits outweigh the downsides, even if they really dread having to deal with the character for any reason. This could make for some entertaining character dynamics.

At the very least, they could run the character in one or two episodes and see how it goes. If it just doesn't work out, they could scrap the idea. There is plenty of room to explore new characters.

I know! How about a talking dog with sunglasses, a ball cap, and a surfboard?
2 x
Top 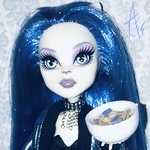 Mikazo wrote:I know! How about a talking dog with sunglasses, a ball cap, and a surfboard?

3 x
"My momma musta put agracite in my cereal when I was a kitten."

Mikazo wrote: ↑
Wed Nov 21, 2018 9:42 pm
Wait - would an ankle bracelet really be effective on Hard Drive? That seems like the last thing that would stop him.

It was just the first thing that came to mind in terms of the Enforcers monitoring him in some way while he works for them. There's other ways, of course. Permanent 24-hour guard detail for one, something the Enforcers can clearly afford to use on him. They have no shortage of manpower for it, and he'd bee a valuable asset they'd want watched (even protected) at all times. And he wouldn't be allowed within twenty feet of any machinery or electronic devices or computers outside of his work for the Enforcers. Plus, I'm sure that, valuable asset or not, Feral would institute some kind of three strikes/zero tolerance type policy regarding him. Slip up and the deal is off and he goes to regular prison rather than his cushy (if closely-monitored) digs.

Would it work? For a while, I imagine. It's similar to deals made with actual cyber criminals in real life. But of course, hacker lady is right, and Hard Drive is playing the Enforcers and biding his time somehow, only pretending to acquiesce. But that's a given. Just because "yes, Hard Drive is lying and plans to doublecross the Enforcers" doesn't mean them forcing him to work for them as part of some kind of plea deal shouldn't be done as a storyline.
1 x
R.I.P. Gary Owens (1936-2015)
Top
Post Reply
35 posts