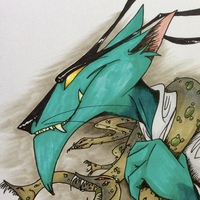 A few more, because apparently I’m not done with Viper. Left is him showing off the hypodermic fangs I mentioned earlier while the right is a doodle of him finding a creepy crawly that has come through an anomaly from another planet and presents him some unique DNA to play with.

You know, one thing I did notice once I got on the forum is that I apparently had a different view of his origin than others did/do. I’ve seen quite a few posts mentioning that the mutagen reanimated him after killing him, whereas when I had watched the show as a kid, I imagined that his vitals were so near a flatline that he was mistakenly declared DOA and sent to the morgue where he mutated into the Viper we know and love.

I guess that’s what I’m still rolling with in my AU. He falls, the mutagen spills on him, he has a violent reaction to it, it reacts to whatever he’s been experimenting on himself with which is why he doesn’t immediately die but instead falls into such a deeply catatonic state that he’s mistakenly declared dead, and in this universe he remains that way for a day or two in the morgue in storage (idk, what do you call the cold cabinets they keep corpses in?), and then he busts out in all his mutated glory. So technically never dead? Just near death? 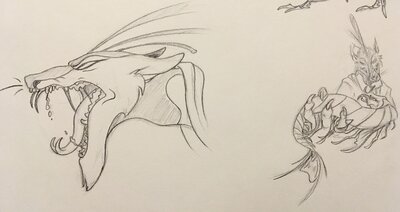 Time for Dark Kat! I never really enjoyed him in the show, tbh. I know he was supposed to be this ultra villain and maybe the SWAT Kats’ archenemy, but he was always meh for me. Now the Metallikats, on the other hand…

Anyway. Onto the head canon for Captain Grape Soda - I mean Barney - I mean Dark Kat!

So, I never saw Dark Kat as a supernatural being and was surprised that so many fans did/do. He looked the part, but something about it felt like a facade to me, and all of his plans were very technology based as was pretty much everything at his disposal, other than the Creeplings. In my AU, the Dark Kat as we know him was basically designed to inspire fear and superstition in others, but it’s all an illusion. He uses holograms a lot (such as in “Wrath of Dark Kat” and helps explain why he conveniently vanishes and escapes when his base/jet gets blown up), but the actual Dark Kat is a different story. The face of the Dark Kat from the show is simply a mask to hide his true identity as a still active (or perhaps retired, not sure yet) judge. No one suspects him of being Dark Kat because his alter ego of the judge is well known for being restricted to a wheelchair and/or walker after an attack at the courthouse during his tenure as a much younger judge. (If this sounds insensitive, please let me know, I’m always afraid to give characters disabilities) While masquerading as Dark Kat, he uses high tech braces on his legs to rise once again to his full height (think a bit like the braces Bruce uses in Dark Knight Rises), but he can’t engage in intense fighting due to his past injuries. Which is something else I noticed in the show. He rarely engaged in hand-to-hand and either had weapons or cronies to keep attackers at bay.

The Creeplings in this AU are techno-organic. Their skeletons are 3D printed and composed of an agracite based material with basic intelligence programmed in. Their skulls are the center of control where the computer brain is housed. The skulls are incredibly sturdy. Their fleshy parts are made out of a dense, flexible almost ballistics gel type substance. It’s actually easy to slice and dice with the right tools, but if you want to stop them for real the head needs separated from the body. They’re not too bright and don’t function well separated from their swarm or Dark Kat. They also have different builds that Dark Kat has created. He has drones (basically what we see on the show), and then he has sentinels which are far fewer in number, but far larger. He has two that typically accompany him and act as his muscle if someone actually gets close to him. They’re also not too bright, but they do their jobs and that’s all that matters.

His whole story is still in flux, but tbh I’m not sure how much I’ll use him in the AU. Though I do kinda want a scene of him monologuing how chaos causes fear and he holds great power when it comes to fear, and then he proceeds to explain how he got all his cool stuff, lol.

Also I was trying to figure out why my sketches were so light. Realized I used a harder pencil than usual. Plus old phone does not take good shots. 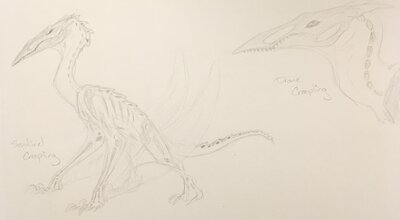 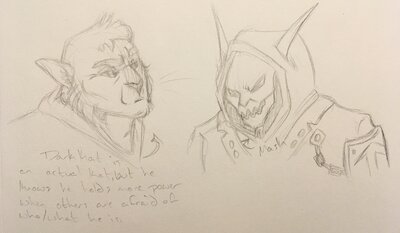 EmpressAkitla wrote: ↑
Tue Dec 27, 2022 1:36 am
The face of the Dark Kat from the show is simply a mask to hide his true identity as a still active (or perhaps retired, not sure yet) judge.

"And I would have gotten away with it if it wasn't for you meddling Swat Kats!"

Seems a lot of people have speculated that he is, or was, a judge. I wonder what kind of a judge he is, in that case. Is he corrupt? Maybe he likes to give harsh sentences to low-level offenders in order to get kickbacks from the private prison industry. Or maybe he is overly lenient with the really bad guys who are ideologically aligned with him in some way.

Maybe he comes across as a hard-nosed law and order type, a personality that belies his more sinister nature. Or maybe he is quite competent and unassuming, and nobody would ever suspect he has that alter ego.
0 x
Top

Mikazo wrote: ↑
Tue Dec 27, 2022 2:01 pm
Seems a lot of people have speculated that he is, or was, a judge. I wonder what kind of a judge he is, in that case. Is he corrupt? Maybe he likes to give harsh sentences to low-level offenders in order to get kickbacks from the private prison industry. Or maybe he is overly lenient with the really bad guys who are ideologically aligned with him in some way.

Maybe he comes across as a hard-nosed law and order type, a personality that belies his more sinister nature. Or maybe he is quite competent and unassuming, and nobody would ever suspect he has that alter ego.

So! I was contemplating this very thing the other day. Currently, I’m in the camp of thinking that he’s unassuming until he realizes a criminal has something he wants - whether that’s technology, skills, or information - and then he’s been known to release said crook, set a low bail, or even bail them out via his well hidden and disguised assets. Then, once he gets what he wants from the crook *cough cough high tech 3D printer that prints with agracite based materials cough cough* the crook tends to just disappear off the streets. Never be seen or heard from again.

I kinda like the idea that Dark Kat (still coming up with an alter ego name) is familiar with Feral or knows him in passing, perhaps because they’ve met due to court proceedings where DK presided and Feral testified or something. Still a work in progress. Getting into the mind of a super villain has never been my forte. I typically write small time, more mundane criminals.

Think I might actually do Feral next. My snag with him is I’m trying to reconcile what we saw in the show with how Chance and Jake got kicked out of the Enforcers, how Feral is portrayed later in the show, and how I’ll handle him in the AU without going too far out in the weeds…