lol I shared the link with a friend so he was like Meowgin? He somewhat remembers the Kat name puns and I think we turned a game into it on messenger lol I think the cutest is Fluffington
2 x
Will work for bubble tea...despite needing money...

Regarding what will be the voting/poll for this...

After some examination, I've realized that SurveyMonkey probably won't be the best tool for this. As a result, I think that just making use of the forum's internal polling utility will have to suffice. I realize that this doesn't guarantee a read, but it does force votes to come from registered forum members. We'll just have to rely on the honor system for that, and hopefully nothing anomalous presents itself.

As there's a sketch from Poecat for 2nd and 3rd, there will be multiple votes per user to help determine those. The amount will depend on how many entries received, but at least two (similar to the previous Art Challenge).
5 x
Top

Will be posting Stormcrow's soon.

In the meantime, three received so far. Your participation items are in the mail. 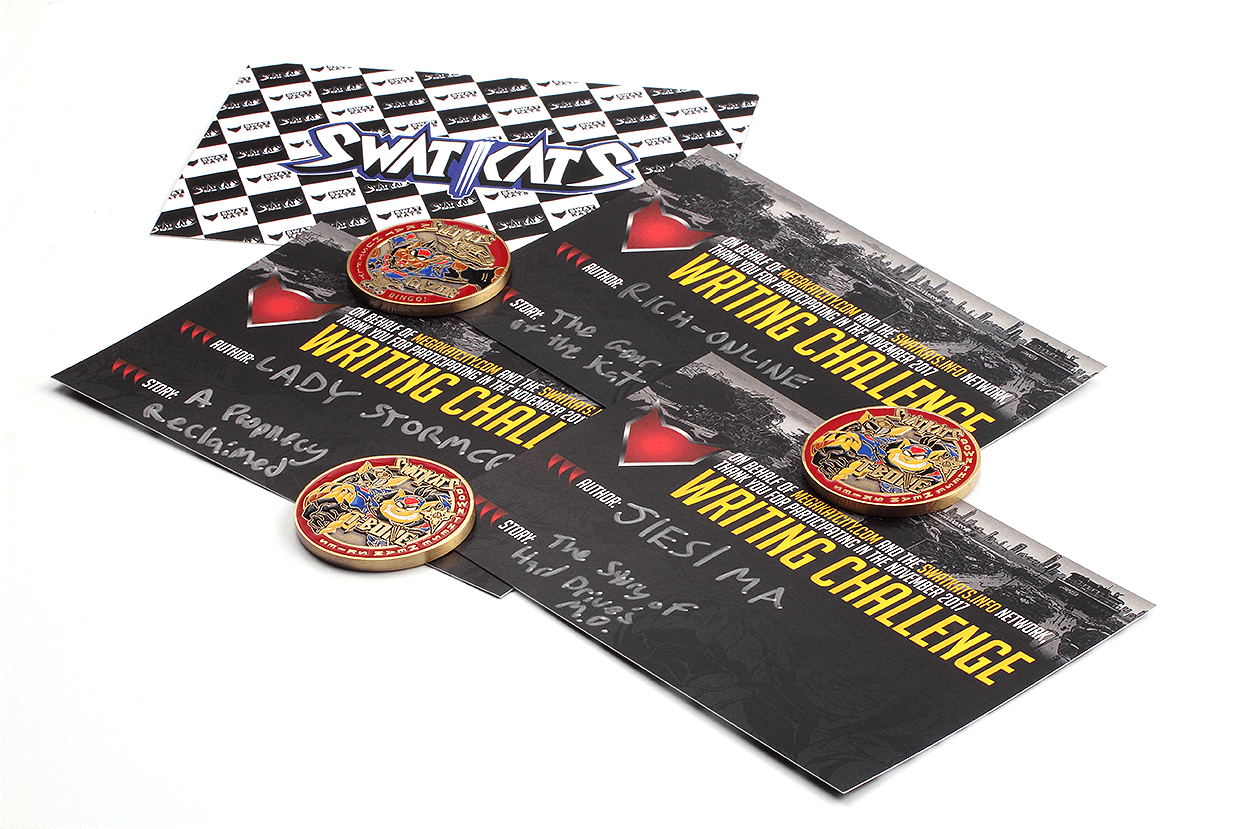 A Prophecy Reclaimed by Lady Stormcrow
The Council has defeated the Pastmaster and locked him away, but Oriana, the former queen of Megalith City, knows it won't be enough. To keep her granddaughter Callista safe, she calls on the power of an old legend - and a magical sword.
5 x
Top

Regarding The Story of Hard Drive's M.O. by Jiesi

Thank you for taking the bold step into writing – it’s with continued practice we all become better writers. The relationship you inserted into Hard Drive’s origin story and his treatment by a borderline villainous character (at least from his perspective) is a nice twist on what would otherwise be a routine technology theft plotline (e.g. SWAT Kats Unplugged). You also touched on some motifs concerning class and privilege that have the potential to be explored. It ended a little bit abruptly, and some conventions concerning grammar could probably have been more closely adhered to, but otherwise I appreciate the effort you gave your story.

Please don’t take this as an insult, but I was curious if English is your first language? The reason I ask is because there were a number of arrangements in the text that seemed a little unorthodox that reminded me of how some English as a second language people I’ve encountered have written things.

Regarding The Gear of the Kat by rich-online

I really enjoyed the mood you established in the opening of your story. It’s a very (appropriately) cartoon-style setup. And, I think your dialog and characterization of the SWAT Kats was perfect. Their interactions flowed very naturally. Your use of flight/aeronautic terminology was also a nice touch, and I circled a few words that I’ll have to remember to use if I ever write again.

Your new character was interesting, though I do wonder if a bit too mysterious. Perhaps I’m not cultured enough to recognize an obvious reference, but I wasn’t sure I understood the origins and resolution. This is ultimately a minor quibble, as the fun of the story is more front-and-center, and I suspect that having this character be so ambiguous is really more of a strength narratively.

The little touches of explaining the origins of the Turbokat and added backstory to their relationship with Professor Hackle were great, too.

Regarding A Prophecy Reclaimed by Lady Stormcrow

I have to give you credit for tackling what’s definitely a strong contender for the most conspicuously absent backstory in SWAT Kats lore.

This was a great read. I loved how well you fleshed out your new characters in so few pages, expertly weaving show references into an original story. I know in other venues you’ve hinted at a few of these ideas, but to see it fully developed is a real treat.

The biggest strength of this story is the world building. The origins of Megalith City, the immediate family of Callista, and the now even more creepy Pastmaster (should really rename him the Creepmaster at this point) are excellent. I appreciate the use of a fixed narrative perspective from a single character (Oriana), which can always be a challenge to do.

What I really like about your work is how you took a jumbled mess of unfinished and half thought out ideas that the show gives us, and you crafted it into a story that not only acts as a way to justify them, but to go a step further and give us a heartfelt tale of betrayal, hope and loss, too.

The only nitpick I have is using terms like "physician" and "nurse" in a medieval setting as they seem a little anachronistic to me and kind of threw me out of the moment a little. In this kind of story, I guess I'm just used to seeing terms like healer, shaman, curer, or Ointment Wizard

I'm so, so happy you like my story, MoDaD. It was a lot of fun imagining how to tie everything together, and include things from canon where I could.

(Regarding the word choices, those terms actually were somewhat in use back then, but I can see how they might sound out of place. Sorry about that!)

Also, my coin and participation card arrived today! Thank you so much.
3 x
When there is no more room in Hell, the dead shall party on the Internet.
Top


Please don’t take this as an insult, but I was curious if English is your first language? The reason I ask is because there were a number of arrangements in the text that seemed a little unorthodox that reminded me of how some English as a second language people I’ve encountered have written

LOL yeah don't worry I'm not offended. English was always something I struggled with. Even my Chinese teacher at one point was correcting my English instead of Chinese cuz my Chinese was pretty good and one of my friends told me I was born in the wrong country

.
English is my first language. Growing up I was told I was/am dyslexic. I don't think I'm that bad compairitivly but I really have to concentrate with numbers or typing on the computer. Like I can write "the" but typing it sometimes comes out as teh or if my cousin who has a hard time talking would spell something out loud I'd sit there trying to figure out what' s-h-e was.
I'm also not even Chinese, maybe in a past life I don't know. But when all my High school friends were trying to learn Japanese cuz it was cool and the anime/manga etc I picked up Chinese and I don't know why. Even though my neighborhood is the largest Chinese spot in Queens I could of learned Japanese with friends. But that's how I got Ma, Jiesi, from my Chinese teacher.
I would also like to add, it's a bad idea to try working in a dry cleaners when you have problems with numbers. Lol ticket 536/563
2 x
Will work for bubble tea...despite needing money...

I got my coin and participation card too. Thank you
1 x
Will work for bubble tea...despite needing money...

Thanks for your kind words. The new character's name is the nickname of one of the Gulf War aircraft, albeit not one given by its pilots. Ironically, my motivation was to have a S.W.A.T. Kats story that was more grounded. As a counter to all the fantasy elements in the show, I wanted to inject a bit of realism into both the air combat maneuvering and the engineering.

For what it's worth, aspects of the new character were intended to be ambiguous to the audience.

-- Rich, who invites all fans to Blackbird Air Park in Palmdale, CA, where they can get close to one of the inspirations for the Turbokat
3 x
Top

Providing additional light into the experiences of the single old scientist sympathetic to the SWAT Kats, and to the heavy weight behind the decisions that Commander Feral makes in his day to day life as leader of the Enforcers.


EricoBard wrote:Professor Hackle, The Neural Neutralizer, the Metallikats, and the lack of any punitive action taken by the Enforcers have always been a sticking point in my craw. Closing Report is my attempt to address the aftermath of Metal Urgency, and to provide some much needed closure. What drove Hackle to be the kat that we see him as? What are the factors behind his choices and decisions in life? For that matter, why would his involvement in the birth of the Metallikats go unpunished?

This story, I hope, will help to provide additional light into the experiences of the single old scientist sympathetic to the SWAT Kats, and to the heavy weight behind the decisions that Commander Feral makes in his day to day life as leader of the Enforcers. Between his hard-nosed perspective on dealing with threats and law enforcement, he must face the same choice that every political leader does; To stick to your principles regardless of the price, or to put them aside, no matter how it chafes at you, for the sake of peace and stability. We call this Realpolitik, and there seemed to be no better time to address it than here.

Your participation item will be in the mail soon-ish

I'll be giving this some feedback over the weekend... of course others are welcome to provide their own as well for this and the other stories, too