The MEGA SWAT Kast - Secrets of the Stars

If your creative masterpiece doesn't fit in art or text... then place it here! (Music, custom helmets, cosplay)
Post Reply
10 posts • Page 1 of 1

The MEGA SWAT Kast - Secrets of the Stars

Other listening options available at podcast.swatkats.info

Behind every great bug love is a great bug love story. Dr. Harley Street has the power to hear what women, specifically the Ci-Kat-A Queen, are thinking, forcing the SWAT Kats to rely on movie trivia to combat their foes. Finally, all of that hard work watching TV all day is paying off. Will T-Bone overcome his fear of bugs? Will Razor reveal T-Bone’s real name to the world? Will Megakat Tower have its “GRAMD” Re-Opening? Terrors from beyond abound in SECRETS OF THE STARS.

Please adjust your humor targeting displays to the lowest common denominator, and note that the accuracy of recollection missiles may vary.

This is a swatkats.info production. Make sure to BUY SWAT KATS DVDs at WBShop.com.
5 x
Top

Randomly, you guys seem like you give Street a hard time for poking the slime.

At least he put a glove on first: 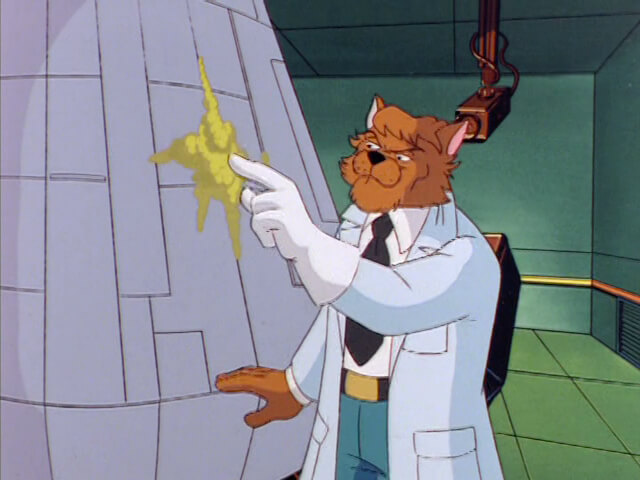 But you're right about the guard with the mustache, though; that guy wins the Idiot of the Episode Award: 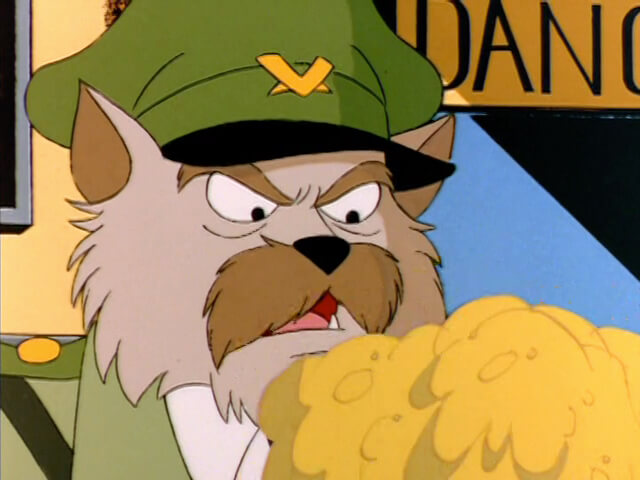 Firstly I would just like to extend a big and public thank you to both MoDaD and Sage for one of, if not the best podcast recording session it has been my pleasure to be a part of. I have a lot of fun memories of recording for the Mega SWAT Kast and look forward to having many many more but I think this one is gonna be hard to top

I'd also like to thank them for letting me run a little nuts with the whole Steve voice thing... I imagion a few people who would likely have told me to knock it off before too long but I am pleased they enjoyed it enough to have to pause the session for laughing so much XD Who knows, maybe I'll try and bring back Steve some way in the future


Kooshmeister wrote:Randomly, you guys seem like you give Street a hard time for poking the slime.

At least he put a glove on first

Putting aside the comedic reasoning we would call Street out on this narrative plot point, because you know it's just a bit of fun, it is also poor science.
The fear of Interplanetary contamination is and has always been so great that even in the height of the Cold War, it brought both the US and the Soviet Union together to create the 1967 Outer Space Treaty. It forbids both nations from bringing space microbes back to Earth, or spreading Earth germs to other planets.


Artical IX of the Outer Space Treaty
Parties to the Treaty shall pursue studies of outer space, including the Moon and other celestial bodies, and conduct exploration of them so as to avoid their harmful contamination and also adverse changes in the environment of the Earth resulting from the introduction of extraterrestrial matter and, where necessary, shall adopt appropriate measures for this purpose.

As soon as the Apollo 11 crew came back down they were quickly whisked off to quarantine to assess and/or limit potental risk. Organic matter found amongst the stars would indeed be treated very much the same way so... Putting on a latex glove and poking it with your finger wouldn't be the wisest move.
It is also a trope explored in countless scifi books, TV shows, movies, games etc. that you don't stick your hand in space goo! Dome it off! Run tests on it with the camera and the lasers! Poke it with a robot arm! Drop a bit of it on a lab rat! Sticking your finger, gloved or otherwise, should be at the very very bottom of a very very long check list!

Buuuut then we wouldn't get an exciting and fun episode, would we? X3

And yes, I will agree with you Kooshmeister, that guard wins the Idiot of the Episode.
4 x
NERO
Top

Yeah but usually they don't even put gloves on. Like Professor Stahlman in the Doctor Who serial Inferno. There's a beaker filled with a mysterious green goo that's so hot it's cracking the glass. Even though there's a guy standing by with special insulated gloves for handling hot things, Stahlman, portrayed as an arrogant know-nothing, insists on grabbing the cracked beaker barehanded, consequently getting the slime on himself, whereupon he spends the remainder of the serial slowly devolving into a Primord (green caveman-like savages). 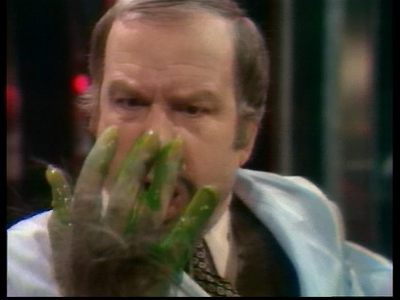 "Now the secrets of Nickelodeon's Double Dare will be mine!"

Worse, like someone bitten in a zombie movie, he of course conceals his condition even while (apparently) still in his right mind, until it's far too late.

So, I know Street is a doofus for poking the slime at all, but bothering to put a glove on at all displayed a level of caution you don't normally see from characters in sci-fi horror. It was the bare minimum, but it was something.

As for the guard, maybe he thought his awesome 'stache would protect him.

Still quite a bit behind in getting to the podcasts. My Madkat moment for this episode is Feral getting yelled at by Manx. The Enforcers are fighting a straight up alien infestation with a species that can control enemies with a single bite in a matter of SECONDS. That is truly horrifying. And Manx is like "I don't care how quickly they brainwash and mutate people, muh Tower!" Holy crap Manx.

Also, that scene where Street is like 'is it okay if we sacrifice one of your own?' and I can picture the Steve just like "put a few more in there, these kids are already driving me crazy.' LOL

Also, isn't Harley Street in Mutation City working at... Megakat Biochemical or something? How do you go from building satellites for MASA and then working for a biochemical company? Those are two complete difference facets of science. Did he go back to school for another degree?
3 x
Top

No. You're probably thinking of Dr. Konway, who works at Enforcer Headquarters. 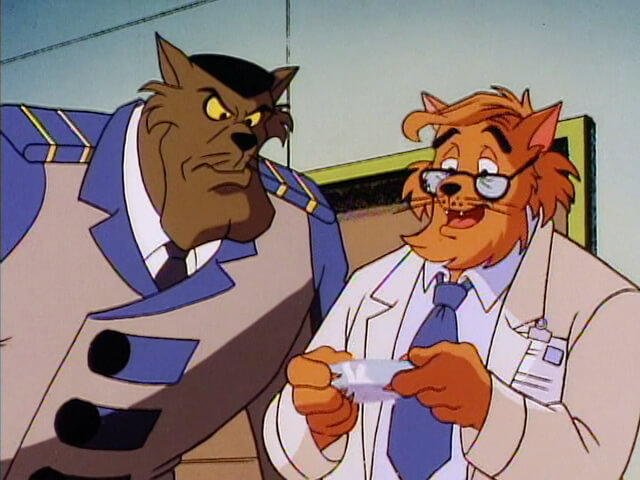 Street does have a connection to Megakat Biochemical though: in the unfinished season two episode The Doctors of Doom, he breaks in to steal a "super-katalyst," but he was basically serving as a gofer for Dr. Viper, and had no interest in the chemical himself beyond getting it for his "partner," and never displayed any knowledge of biochemistry.
0 x
R.I.P. Gary Owens (1936-2015)
Top
Post Reply
10 posts • Page 1 of 1

Return to “Other Creative Fanworks”