Hello, i am the new guy!

Tell us about yourself and how SWAT Kats is special to you!
Post Reply
5 posts • Page 1 of 1

Hello, i am the new guy!

I guess I have to introduce myself. I am a man and I am from Paraguay, although I am of Argentine nationality. I would like to say that this cartoon is part of my childhood, but I would be lying to a large extent: I do remember seeing it on Cartoon Network when I was 6 to 7 years old or so, but I barely have memories of it other than it had a dark hue that reached give me some fear in some scenes, but nothing more. Also, the series didn't take long to air, at least as I remember it.

Only in the middle of 2019, and before YouTube blocked comments on "children's" videos, clips of the series appeared as a recommendation on YouTube and when I saw them I said to myself, "Hey, I think I've seen this series before.", And looked up the series on the Internet to see it again -and by the way, download it, which I managed-, download images, and I said to myself: "this series was great: too bad it didn't last longer and hardly anyone remembers it, at least in the Spanish-speaking fandom." Without neglecting that it has its flaws - it has everything - I loved the characters, their world, the adventures, etc.

I've even started writing two fanfics since last year, but that's another story.

So I came across this forum recently and decided to jump in to learn more about the fandom and the series itself.

The only drawback I have is that I only manage in Spanish - I understand some English, but I don't manage well with it - so I depend a lot on Google Translate. If you think that I write badly, that's why; sorry.

I will try to improve my command of the language if possible.

I think that's all. Thank you. 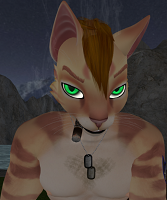 Welcome to our humble City! No worries about the language barrier, good luck with your stories, be sure to post them in the correct sections once they are ready.
2 x
You search and search for something, never realizing it is within and always has been. You can not find it, you can not understand it, you simply accept, and believe, and it will grow.
- Heretic's Faith, Randall N. Bills
Top

Glad to see you here, Elohim! Enjoy your stay in Megakat City.
3 x
"Saturday is usually my morning to sleep in."
Top