Threads dedicated to the discussion of individual episodes. Everything from casual observations to in-depth analysis welcome.
Post Reply
44 posts


Kooshmeister wrote:But, looking at the outline for The Deadly Pyramid and how it differs from the final episode, it does make me wonder about what The Doctors of Doom and whether we really can consider it even tentatively canon like the other two.

"Deadly Pyramid" outline? I must have missed that memo. (goes to look up thread on that episode) 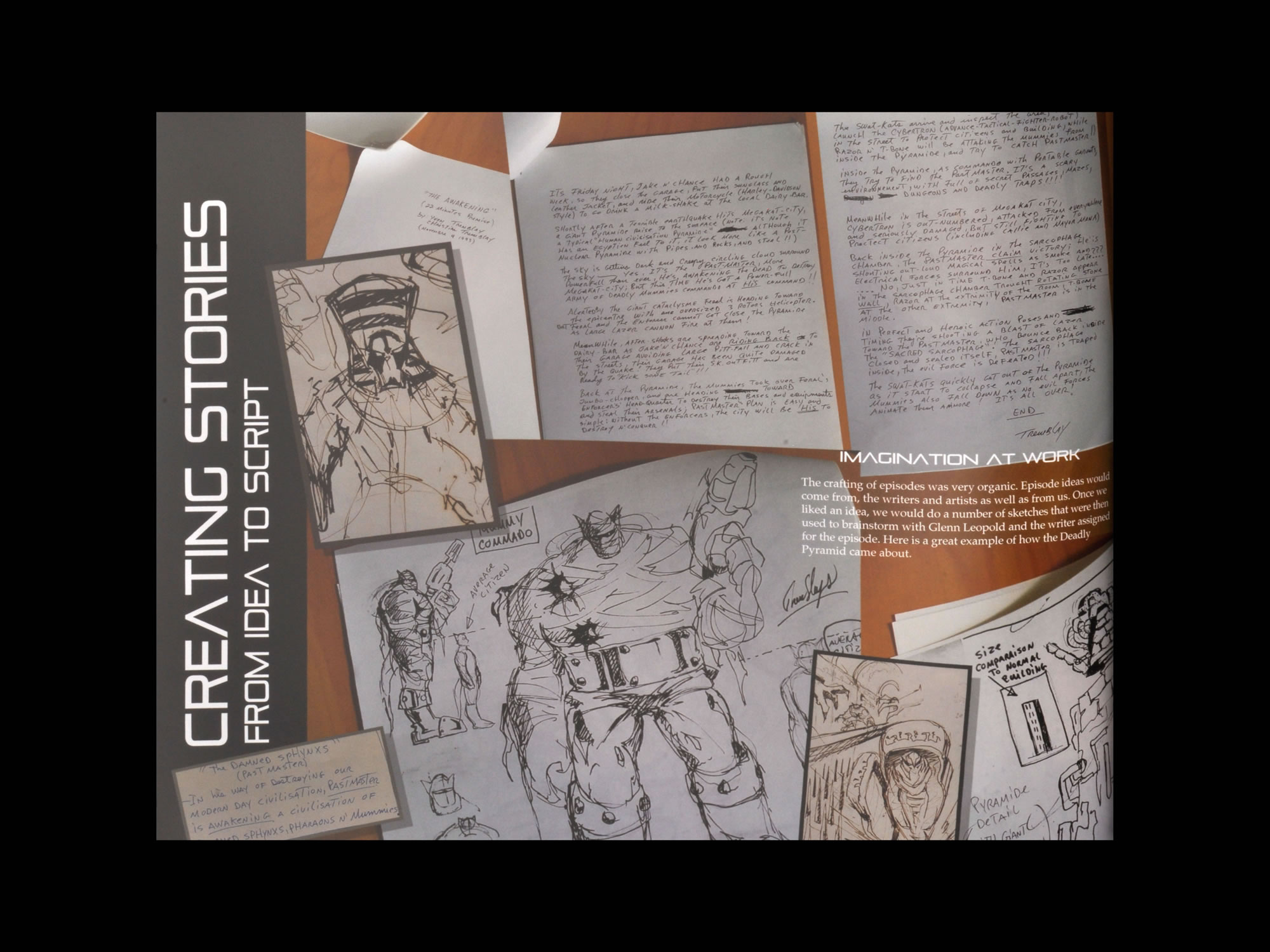 I see too that that episode's working title (before it was typed up as a premise) was "The Damned Sphynxes." Did the Tremblays really think that would fly when they submitted the handwritten plot summary?

Here are the storyboards for The Metallikats (featuring that unused Megakat City sign):

As I did with some of the other episodes whose scripts we've gotten ahold of, here's where the one for The Metallikats differs from the finished episode:

1. Instead of the warehouse/tuna factory, the script opens on the outskirts of Megakat City, with the Metallikat Express smashing through a sign that says "Megakat City Welcomes You." Evidence of this original scrapped beginning was seen as far back as some unused background art on Cartoon Network's old website. It survived as late as the storyboarding phase and, of course, had background art done for it. I dunno why it was cut.

2. The name of the factory is Mercury Tuna, Inc. By the time they did the storyboards, it'd been renamed to Megakat Tuna.

3. The crate containing the katnip is labeled "Fresh Tuna." In the finished episode, it has no markings on it at all (although the label survived into the storyboards).

4. When Fango opens the crate, there was supposed to be a closeup of the other mobsters reacting with anticipation. This too survived as far as the storyboards but was ultimately nixed. Incidentally, in the storyboards, the mobsters are drawn with a bit more individuality instead of being "all alike" as the model sheets put it (a detail not in the script).

4. Katscratch's name is spelled with a "C." So is the catnip. It appears that early on, the writers were unsure whether everything with "cat" in it ought to be spelled with a "K" or not. For the purposes of simplicity, I'll just keep calling them Katscratch and katnip.

4. Fango is said to "grin so wide he's bearing his teeth." He doesn't smile in the episode. Also him sniffling and rubbing his nose (often interpreted as him having "sampled" the katnip beforehand) isn't mentioneds. This was something added during the storyboard phase, and why he does it is still open to interpretation.

5. Mac is called Mace Mange throughout the script. I'll continue calling him Mac, though. He's also mentioned as wearing a double-breasted suit, when in the finished episode (and any time he's wearing a business suit), it's single-breasted.

6. The Manges aren't described as having red eyes without pupils until after they unmask themselves. Their metallic-sounding voices are noted, though. Additionally, a detail about them dropped for the final episode is that they have jerky movements with lots of clanking metallic noises (in all of their appearances in the show, they have very smooth, noiseless movements except for the occasional heavy footstep).

7. When Mac says he ran "a couple" of stop signs, he calls them signals, Molly corrects him thusly: "Five signals, and here they all are..."

8. Extra dialogue: When the Metallikats bust in, Katscratch follows up his exclamation of "Who the--?" with "What's goin' on?"

9. As the Metallikats enter, Fango closes the crate lid rather than reaching for his gun as he does in the episode. Speaking of which, throughout the ensuing scene and presumably until they draw them, all of the mobsters (including Katscratch and Fango) keep their hands inside their jackets close to their guns, instead of relaxing and putting their hands in their pockets.

10. When Katscratch shoots Mac and Molly, his laser blasts don't leave holes in their clothes. They don't suffer any clothing damage until the much larger laser barrage from all of the mobsters later.

11. Katscratch's death is slightly different. After being shot, he falls behind some crates completely out of sight. No description of his burned hand sticking up into view. This was something added in the storyboards.

12. Another detail is there were supposed to be two shots of the other mobsters gathered around looking down at Katscratch, and it was cut down to one. The first shot was boarded, but cut.

13. Instead of one guy yelling "Nuts to that!" and impulsively shooting at the Manges, with just one other guy joining him, all the assembled mobsters (presumably including Fango) shout that line together and fire at once.

14. The mobsters don't bend down and stick their faces close to the beeping cigar before it explodes. They do walk over to it, but the shot pans up to them looking confused, instead of them leaning down into the shot with the cigar.

15. As the Metallikat Express speeds off and whips past the screen, we were supposed to see Mac and Molly through the windshield. Although this was nixed in the boards, it's entirely possible we would've gotten this detail of Mook had animated the episode.

16. As they're flying along on patrol, T-Bone and Razor sing a song (!): "When evil rears its ugly head / And the wheels of justice fail / Here come the SWAT Kats to save the day / And whip that villain's tail!" This suggests a much more lighthearted cartoonish approach to things (some of which survived into the actual episode, such as Chance's rapid change of clothes offscreen when Jake tells him Callie might be in danger).

17. A small detail, but as the Enforcers arrive, Feral parks much closer to the door of the warehouse than in the episode, where he parks some distance from the building. As he gets out and notices the Turbokat, paramedics are described being inside the building in the background searching the rubble for survivors.

18. When Ann appears, Stenstrum says to "Check 'The Giant Bacteria' for Ann Gora design"), suggesting that either Ann's design had only recently been finalized, or that she wasn't originally intended to reappear after that episode and Stenstrum and others just kept using her in lieu of the other reporters from that episode (similarly, Lance Falk's script for Destructive Nature refers to her as being "from show one" as if she was originally going to appear in just The Giant Bacteria).

19. Jonny isn't explicitly described. Ann is only said to be accompanied by "the KATSEYE NEWS TV crew," suggesting that we were originally going to see those other two reporters accompanying Ann and her (as yet unnamed) cameraman here.

20. Callie rolls her eyes at Feral's rant instead of pouting and crossing her arms.

22. Not a difference, but the reason Fango's crowbar is wrapped around his neck when he's brought out is said to be that it was from "the force of the explosion." I'm surprised this didn't kill him if that's the case, although what does and doesn't kill people in this show is sometimes inconsistent (see Hard Drive in Night of the Dark Kat, who definitely looks like he should've died from taking a bazooka blast).

23. Paramedics are the ones who wheel Fango out, instead of a single fireman as in the finished episode. I think it's a paramedic in the storyboards too; although they don't give us a good look at the guy pushing the gurney there, he isn't wearing a fire fighter's helmet.

24. As Fango is wheeled off when Feral is done interrogating him, Ann and "the TV crew" follow after him. For some reason this irritates Feral.

25. Scaredy-Kat is called "Fraidy Cat" (or "Fraidy Kat" if you prefer). This was a name for him that definitely survived well into production, as that's what he's called on the model sheets for this episode. I'd really like to know why it was changed. Also, when Chance tells Jake he's watching Fraidy Kat, Jake gives the TV a look. In the episode, he just ignores it.

27. Extra dialogue: "Fine. Let Feral handle it. He's the hot shot who wants us behind bars."

28. We finally get the answer as to what Chance means by Scaredy-Kat opening the closet door "again." There's an extra bit preceding the scene where the girl hands him the bomb: When he opens the door the first time, he sees her, and reflexively shrieks and slams the door in her face. Then, upon realizing it was a hot chick, he breaks the fourth fall, gives a "Why the heck did I do THAT?" look at the audience, then opens the door again and his handed the bomb, which he unthinkingly accepts.

29. After the quick change of clothes, Chance is still referred to as Chance even though he's in his "SWAT Kat uniform" and masks and therefore should be T-Bone at this point. I guess this is another bit of early installment weirdness where "T-Bone and Razor" and "Chance and Jake" were used more interchangeably (Glenn Leopold did the same thing during the centrifuge contest in the script for The Pastmaster Always Rings Twice, even though they're technically supposed to be T-Bone and Razor in that scene, not Chance and Jake). I believe, as the show went on, the rules about what they were referred to and when got slightly stricter.