Threads dedicated to the discussion of individual episodes. Everything from casual observations to in-depth analysis welcome.
Post Reply
58 posts

Furlong29 wrote:It's also funny to see that at one point, it was called MegaCat City! (Look at the sign after the Swat Kats return to their base.) 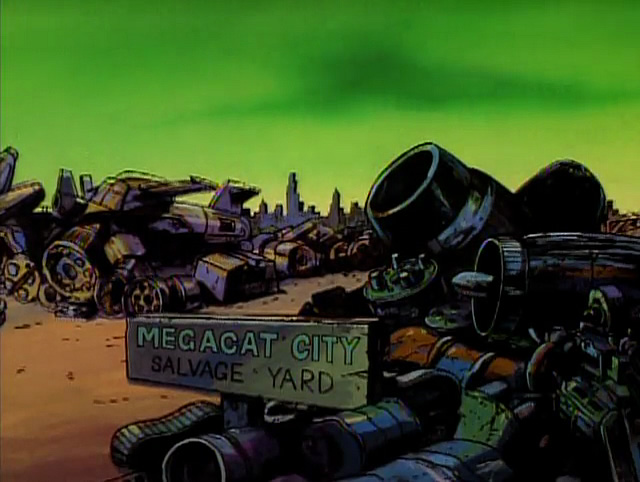 I never noticed that.

Felony wrote:LOL one other crazy wild thing that had me saying "huh?!" even during its original airing was they flew the Turbokat INSIDE the lab! AND they didn't kill Callie in the process. That was a wee bit over the top. ^^;

Agreed.
0 x
~BlueFoxxo
Artist, Musician, Writer, Gamer and
LGBTQ+ Supporter
also i'm bi
"Knowing the mouse might one day leave its hole and get the cheese... It fills you with determination."
Icon by @menacing-marshmallow on Tumblr
Top

I wanna talk really quick about Morbulus. While he was a character with a somewhat "gimmick", he really had no purpose. No sort of characterization put into him. He really didn't need to be in this episode, besides to be a plot device for Dr. Viper to make the Giant Bacteria, as the title calls it. I just really see him as a character that was supposed to have reason, but is just a plot device and the episode would stay the same without him. Decent.
0 x
~BlueFoxxo
Artist, Musician, Writer, Gamer and
LGBTQ+ Supporter
also i'm bi
"Knowing the mouse might one day leave its hole and get the cheese... It fills you with determination."
Icon by @menacing-marshmallow on Tumblr
Top

This is an episode I simultaneously love and am eternally frustrated with. The lower-end animation bugs me. I wish it'd been one of the four Hanna-Barbera slated for the Mook treatment in season one. I think the bacteria monsters would've benefited greatly from improved animation, being somewhat amorphous in nature.

The violence and death doesn't bug me, except when it comes to Dr. Zyme. If this had been his only appearance, I can't say I'd care much... but since he got developed so well in The Origin of Dr. Viper, it feels like such a waste he gets gobbled up here. But that's a discussion for that episode's thread, I suppose. Suffice it to say his is the one character death in this episode I'd change if I could.

As for stuff I did like? The opening chase sequence is great (if a little under-realized because of the animation), and I like the sequences with Dr. Viper, and how there is general air of unease and creepiness in every scene he's in, especially in the swamp scene. That scene of Morbulus being mutated scared the dickens outta me as a kid! Viper is so evil and sadistic in that scene. I think they toned him down a lot in later episodes. The farm scene is well done in terms of suspense and scariness, especially now that the DVD includes the retored bit where Viper feeds the farmer to the monster (what did I say about Viper being one sadistic dude here?).

Other things, though, like the mixup with the monsters' eyes and Feral (for some reason) being blamed for Morbulus' escape when it's the SWAT Kats' fault and the show's refusal to acknowledge it, do hamper my enjoyment of it a little. I also find three scenes involving them really dumb:

1. The scene of Callie driving through the first one (the one that used to be Morbulus) and splitting it in half is poorly animated, in fact, more poorly animated than anything else in the episode. Also... why does she just stop? She could've kept on going, but stops. Why? Even a single line about how the purple gunk has clogged the engine somehow would've sufficed. It makes her look like an idiot.

2. The subway scene. The shot of the bacteria monster engulfing the train is very poorly done. The creature(s) suddenly gain the ability to morph into blobs for this sequence, and I don't think they got the idea that it was eating/absorbing the train across very well. It looks like it just flows over it and moves on. Razor's "Oh no, too late!" is the only thing suggesting it's actually eating the train.

3. The attack on Zyme. It's quite possibly the worst excuse for a monster attack in the series. Okay, so, the petrified (as the model sheets describe it) bacteria monster is standing facing away from the building. But upon returning to normal, it decides to ignore Feral's helicopter just to turn and reach in to get Callie and Zyme? Why? The thing is the size of a skyscraper now. Why does it care about two teeny morsels suddenly? Also, if you frame-by-frame it, Callie sees the hand coming before Zyme does, but gives out no warning, and when the glass smashes, she basically runs and leaves him to die. Not that he's entirely blameless, as his response to this is to basically just throw up his arms, go "Aggghhhh!" and die. Also it seems to change from the creatures hand, to its mouth (or the animators accidentally added eyes to the hand for the shot of it coming down over Zyme), to its hand again between shots. Heck, the fact it's its hand that comes through the window, added to the fact the thing suddenly turns and goes after the copter, make it seem like it almost got Zyme, but then was distracted, despite the fact he disappears from the story after this and is never mentioned again. All in all, possibly the worst sequence in the episode. Not only do they kill Zyme off, they do it poorly.

And yet for all this it remains a favorite of mine just because it was the first one I ever saw. It left an impression on me, and I've been a SWAT Kats fan since.
0 x
R.I.P. Gary Owens (1936-2015)
Top

LowdogCraft wrote:He really didn't need to be in this episode, besides to be a plot device for Dr. Viper to make the Giant Bacteria, as the title calls it. I just really see him as a character that was supposed to have reason, but is just a plot device and the episode would stay the same without him. Decent.

Well, his inclusion as an enemy provides an excuse for an opening action sequence. And at least part of the episode wouldn't be the same without him. If you took him out, the first act would need to be drastically rewritten. There'd be a different opening, without an aerial chase, and Dr. Viper would presumably create the bacteria monster from scratch instead of mutating someone into it. Acts II and III would be the same without Morbulus, but Act I would be really different.

As to why they went the course they did with him, Mark Lungo suggests the eyes in the back of his head was so the monster(s) he turns into could all have eyes after they divide. But that, I think, reduces him even further. Instead, I think the decision to have him mutated into the first monster was because having Morbulus meet up with Viper and get transformed by him would've been a way for the writers to link the two otherwise unrelated plots. Having Morbulus stick around and get used for the main plot instead of just getting arrested and disappearing like Chopshop in SWAT Kats Unplugged would (in their minds) justify his use at the beginning.

Jeez... you're right. I guess he really does have purpose. I wanna make a review of this episode and start a new review series where I look at all kinds of material from the SK Universe and the Fanbase, and this episode will be first to be reviewed. I will put your comment into the script somewhere.
0 x
~BlueFoxxo
Artist, Musician, Writer, Gamer and
LGBTQ+ Supporter
also i'm bi
"Knowing the mouse might one day leave its hole and get the cheese... It fills you with determination."
Icon by @menacing-marshmallow on Tumblr
Top

Go for it. Heh, as for myself, I did really in-depth reviews of the first four episodes and posted them to The Agony Booth years back. I still have them somewhere. Maybe I'll put them up on here somewhere. They're really long, too, as I go through each episode scene by scene. I never got to The Metallikats. I started writing its review but never finished it. My general consensus was that, as fun as the show was, the thing is plagued with problems, from both a writing and an animation standpoint, and we all really have the nostalgia goggles on if we think otherwise.

One of my primary complaints was the lack of a proper pilot, and how viewers are just dropped into the world of Megakat City without a proper introduction to the characters and setting. The closest we got was the prologue that originally aired before The Pastmaster Always Rings Twice which is supposed to have explained the show's general premise, although I've never seen it (has anyone? Can it be viewed anywhere?). And even that's pretty lazy; just a clipshow and Barry Gordon narrating.

But don't get me wrong. I love this show, warts and all.

As for the spelling of the city's name as "Megacat," that happens a lot. If you look at the model sheets, for example, the Kat's Eye News helicopter is called "Cat's Eye News Chopper." And on the model sheets for The Metallikats, Katscratch's name is given as "Catscratch." It seems the general rule of thumb wherever the word "Cat" is concerned is that it should always be spelled with a K, and that any spellings with a C are errors.
0 x
R.I.P. Gary Owens (1936-2015)
Top

If you can find the reviews, post em here. I'd love to see them!
0 x
~BlueFoxxo
Artist, Musician, Writer, Gamer and
LGBTQ+ Supporter
also i'm bi
"Knowing the mouse might one day leave its hole and get the cheese... It fills you with determination."
Icon by @menacing-marshmallow on Tumblr
Top

I guess put them on Dropbox and post them in the Other Creative Fanworks forums... that's really the only idea I have.
0 x
~BlueFoxxo
Artist, Musician, Writer, Gamer and
LGBTQ+ Supporter
also i'm bi
"Knowing the mouse might one day leave its hole and get the cheese... It fills you with determination."
Icon by @menacing-marshmallow on Tumblr
Top
Post Reply
58 posts