Threads dedicated to the discussion of individual episodes. Everything from casual observations to in-depth analysis welcome.
Post Reply
18 posts

I love this episode, the thunder truck was pretty awesome and when they went out into space was awesome.

And we learned an important lesson: DON'T DING THE TURBOKAT!!!

I don't know if anyone's already mentioned this somewhere, but it's something I noticed a while back that's nagged at me since. Maybe it's just me, but I think this kid really looks like what a kitty Ulysses might've looked like. 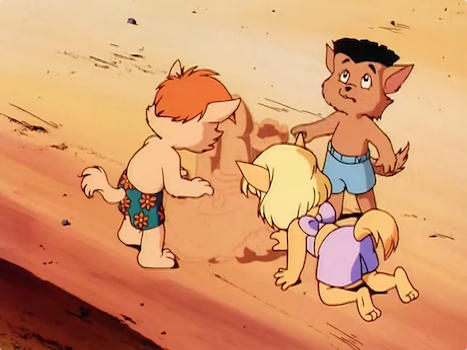 From the hair? Possibly, but their facial fur are entirely different colors. Maybe he's a fan. Who wouldn't want to be as tough and charismatic as Commander Ulysses Feral?
2 x
Top

Maybe his fur was singed darker from too much stress.
1 x

Or crewcuts are just semi-popular haircuts in Megakat City, as in real life. Lenny Ringtail has one.

But on the other hand, even with that, the different facial features don't mean much; plenty of people who are immediately related don't look very much like one another.

As it is, I think he's just some kid with a crewcut. Even if he does kinda look like a mini Feral.

And would that make the other two relations to Fuzzy (or Zyme?) and Callie? XD
1 x
https://nova.swatkats.info - SWAT Kats: Nova Squadron
https://darkkat.com - Dark Kat’s Doomsday Page
https://felonykat.com - Class A Felony

I'm going with they're just some kids, myself (they are after just "kat-kids" in the model sheets) but who knows? They could've secretly been the show's attempt to sneak in a backdoor pilot for something like Tiny Toons; kid characters based on the adult ones.

Chester Furlong and Jerry Clawson are the Mini SWAT Kats, Sirloin and Lawnmower! Inspired by their heroes the SWAT Kats, who they don't even know are in fact their own uncles, they've become the SWAT Kids, protecting playtime everywhere! Together with their allies Callie Briggs' niece Cassandra, Felina's son Ulster and the late Dr. Zyme's grandson Nathan, they're gonna clean Dr. Lizardo's clock! Lizardo is in fact Eddie Purvis, Dr. Viper's nephew. His mom says "Dr. Viper" is already taken and "Dr. Venom" sounds too mean (and Hasbro might sue, considering Dr. Venom was a Cobra scientist in the G.I. Joe comics).

Cassandra thinks that the SWAT Kids are dreamy, while no-nonsense tough guy Ulster insists they play too rough, but at his mom's urging is willing to work with the two masked mystery kittens to save the day, and Nathan is intent on avenging his grandfather by combating evil science wherever he sees it. Eddie--I mean Dr. Lizardo is forever trying to design a formula to put in the apple juice at snack time to turn his playmates into his unwitting slaves! But he'll have some rough competition from his cousin Ophion (who he strives to outdo) and Kyle Kat.
1 x
R.I.P. Gary Owens (1936-2015)
Top
Post Reply
18 posts