by MoDaD
Just realized this episode didn't have a dedicated thread.

So, here's some assorted items from its SWATKATS.info page for Bride of the Pastmaster: 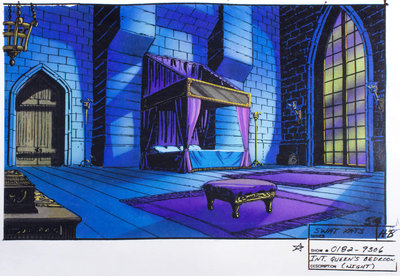 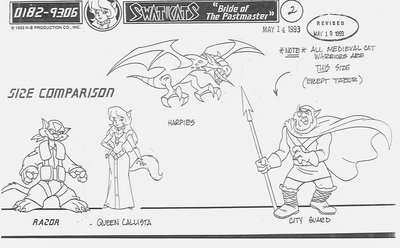 by Echo
In a way, I liked and disliked this episode.

Liked: Got to see the SWAT Kats go somewhere new, met Callie's ancestor, got to see a new vehicle that we never see again (as far as I know), got to witness the SWAT Kats have a battle over the ocean (not the bay like in The Giant Bacteria). TBone being completely jealous of Razor getting all the attention from Callista.

Disliked: Razor being really cocky and letting everything go to his head as stated in the episode, but he gets over it in the final act.

All in all, decent episode that teaches teamwork makes the dream work~

by Mikazo
I guess if Megalith City is ruled by a queen, does that make it a meownarchy?

I liked how in the podcast you thought of nicknames for the giant worm creature. Maybe call it "Valdez," after the oil tanker.

I sometimes wonder, if the Pastmaster ever got tired of playing with the space-time continuum, maybe he could finally retire and get a lucrative job as a DJ at an oldies radio station.

by Ty-Chou
I was just thinking about this the other day. Way back when the podcast did the Bride of the Pastmaster episode I said I was going to share some thoughts about this episode and what it implies about both the history and the world. And then I never did.

First, the oil-sucking eels. No one's surprised they exist. In fact, we see two different ones in the episode, which means that the world of the Swat Kats, without magic or mutation, contains fantastically large and monstrous creatures. What other natural monstrosities exist in this world? How common-place are they?

When the Swat Kats go back in time to Megalith City, I am going on the assumption that they are in the same geographic location, especially since the Pastmaster was dug up in Megakat City. The Swat Kats have never seemed to have heard of Megalith or Queen Callista. It seems like something that would have been taught in history class. This suggests that Megalith City and its history was wiped out of existence somehow. Our heroes possibly left a doomed city and didn't even realize it.

Shall we also bring Mad Kat into this while on the subject of ancient times? He was a jester in someone's court. Possibly in Megalith City?

Lastly, the cyclops and the dragons. The Pastmaster specifically states that he brings them from the past. These are not beasts created by magic. Which ties back to the eels. Apparently, this world has had crazy, scary beasts throughout its history, from dinosaurs into the modern age.

by Leon Mane
Alternate timelines are possible. Could be that the Pastmaster somehow forced it into a timeline where it was forgotten?

Monsters as naturally occurring threats. I'd say that justifies the Enforcers more than ever if they're common threats. Great for fanfiction, too.

Leon Mane wrote: ↑
Sat Nov 17, 2018 7:09 am
Alternate timelines are possible. Could be that the Pastmaster somehow forced it into a timeline where it was forgotten?

I could agree that the alternate timeline is a possibility save for the fact that Callista looks like Callie. Either they are of the same bloodline or Callie is a reincarnation of Callista. Neither could happen if Megalith City slipped into a different timeline. Maybe the city could disappear, but Callista or members of her bloodline would have had to stay in this timeline for Callie to exist.

Being "lost to the fog of history" is also a bit of a far stretch. Medieval time periods were only between the 5th and 15th century. We know about ancient civilizations and rulers centuries back into the BC era. There was a castle. Remains of castles tend to stick around for a long, long time. If nothing actively tried to get rid of the castle completely, the remains would probably still exist somewhere in the city. You could probably get a tour of it. No doubt Megalith City and its history would be common knowledge to everyone, including Chance and Jake. Even if not interested in history, they'd be visiting the castle on school field trips and probably covering it at least every other year in history class. Even if they did not retain much information on the time period, they should have at least known Megalith City existed at one point.

I think we can agree that something happened to Megalith City to not only wipe it off the map, but to cut it out of history. Alternate timeline isn't out of the realm of possibility. It's also possible for Megalith to be wiped out sometime after Callista's reign. There is plenty of time between then and the modern day for something to happen.

As you mentioned, Leon, great for fanfiction.

by Agracite
I always was confused by this storyline’s time frame. After the episode Pendragon from the series Gargoyles aired a few years later, a sort of Back to the Future Butterfly Effect time altered theory came to my mind. This combines both Bride of the Pastmaster and The Pastmaster Always Rings Twice episodes.

Megalith existed where Megakat stands now. The Pastmaster succeeded in forcing Callista to marry him. He was able to do this as the SWAT Kats had not yet gone back in time to stop him. Some event could have caused the medieval city and all its occupants to have been destroyed.

What event you ask? I’m guessing the marriage didn’t go well cause yeah hello, evil sorcerer guy forced this on a good hearted caring queen. I could see the Pastmaster growing frustrated and later outright angry over his Queen not loving him and the citizens hating him, possibly even leaving.

Note that Megalith’s castle is on a cliff. Unable to deal with this any further, in a fit of rage Pastmaster destroys the cliff the castle is on, sending it down below, burying it along with its queen. The land there is more flattened and thus why there is no longer a castle. Any books or documents of its history lost to the ages in that rubble.

Now there is still a conundrum from the first episode of the Pastmaster being imprisoned. This could have been the event that caused the Magic Council he spoke of to imprison him and bury him by his tower. After all, it survived and was a few miles from Megalith.

Now we fast forward to modern day Megakat City. Callista may not be remembered through history enough to make a mark of importance to be included in standard school history books. The museum gets a call a few years before the Pastmaster is released. A book was found by arrested grave robbers. Or perhaps the museum was charged with exploring the historical site and they found the Tome. Or Dr. Sinian herself began the project and she found it. The museum obtains the Tome of Time.

Move forward to the night Tom and Jack are doing their grave robbing and stumble on the Pastmaster and open up the crate freeing him. This sets off the events in both episodes. Pastmaster is defeated by the SWAT Kats and sent back in time in The Pastmaster Always Rings Twice. However, there is a change in Bride of the Pastmaster. The change is somehow, the Pastmaster knows of the SWAT Kats.

How is THAT possible? Through whatever events that took place on how he managed to get back to Megalith City during Queen Callista’s reign, to the Pastmaster’s future self, those events occurred in his own past. That is to say the Pastmaster had already experienced the SWAT Kats defeating him as he sets up his plans on getting Callista.

Of course if he knows about his future, that would include being locked up by the Magic Council. Didn’t he plan for that? Maybe he did but you see, with the SWAT Kats being in the medieval time to stop him, they changed the way things happened. Instead of the Pastmaster succeeding in getting Callista to marry him, ruling Megalith, and so on, he failed. They left but then what? Was the Pastmaster destroyed? No given his further appearances in later episodes.

Perhaps the SWAT Kats only delayed the inevitable destruction of Megalith City. We never do get to see if there even is a Megalith Castle, but I think it would be noticed in the scenery somewhere. It could even be in the bottom of a canyon in Megakat Canyons, having crumbled and fallen due to weathering over time as the land became desert. In history books, it may be only seen as a legend like King Aurthur and Robin Hood, but based on the actual truth of it existing.

Mind you, this theory is based off the conclusion that Megakat City’s existence and the SWAT Kat’s as well isn’t dependent on Megalith’s survival. That opens up another theory more complicated than this one which reads more like fiction I may still write. LOL

“Huh?” you must be saying. “Did your momma put crack rocks along with agracite in your cereal, Agracite?” No no, but I know this may be confusing as it is difficult to explain. Feel free to add to my mess or poke holes in it. LOL It would have been neat to see the SWAT Kats tell Callie about all of that, or Dr. Sinian. Razor might even be curious to learn what happened to Callista and seek her out in an episode, so we the audience can know of Megalith’s new fate and find there were legendary heroes also named the SWAT Kats...

by marklungo
I continue to be amazed by SWAT Kats fans' ability to explain the series' plot holes. Once again, I realize that we take the show (or at least certain aspects of it) more seriously than the writers did.

by Ty-Chou
Obsessing over plot holes is what fans have done and will do until the end of time.

But great point, Agracite. I did not even notice the castle was built on a cliff. Definitely could be very easy to lose the whole castle in one devastating swoop at some point in history.

by NeeKnight
Whenever I watched that episode, this is how it played out for me:
As for all the Past events that happen after this episode, we will just say