It’s been 24 years since the debut of SWAT Kats: The Radical Squadron. Over the course of two seasons, a number of characters, stories and scenarios have been introduced. Amid all of that action and adventure, several unanswered questions have arisen. Now, it’s time to answer them! For this challenge, choose an event, scenario or other quandary posed by the show that left you wondering just how that certain thing came to be, and use that as inspiration to write a story to explore it in more detail. Resolving the unresolved need not be limited purely to just answering the question, but can also be used to create a backstory, or drive a present-day based work of fiction forward. Resolving the unresolved can also be just a minor part of the story if it serves as inspiration to tell a greater tale. Mystery, drama, action, adventure, peril, romance, etc. are at your discretion, and largely depend on just what unresolved aspect you choose to take on.

View the details at the Writing Challenge Landing Page here.

Good luck to all participants! Make sure to check this thread for participants, announcements, etc.

The deadline for this event is MONDAY, NOVEMBER 27, 2017, (Cyber Monday, I guess

). A little extra time for this as several people are going back to school and will be juggling mid-terms.

One of the major differences for this is that the submitted stories SHOULD BE EMAILED to writing (at) megakatcity.com and I'll be adding those to the writing subdomain to keep them organized and easier to share (at least on my end). You are of course free to post your stories elsewhere, but I'm trying to keep this thread easy to skim through (posting an excerpt here is fine, but a long story can kind of choke things up)

Looks fun! Question - can you focus on a character backstory, or does it have to be an event or situation depicted in the show? I see that the writing can be used to create a backstory, but I'm not clear as to whether the backstory can be the main focus of the writing.
1 x
Top

It's fairly open to interpretation. Either should be fine. Regarding a character backstory, I'd assume the writer would want to explore some aspect of a character that wasn't explained on the show, either explicitly or implicitly. E.g. what's the deal with cornuts Felina's parents. Are they dead? Is her father on good terms with Cmdr. Feral? The unresolved aspect of this is 1. Felina being Cmdr. Feral's niece (as opposed to daughter) and 2. Cmdr. Feral's hasty reference in A Bright and Shiny Future where he comments his brother would never forgive him if he fired her from the Enforcers. A more explicit example would be "What happened to Dr. Greenbox after the events of Unlikely Alloys," or "Where did the SWAT Kats hangar come from?"

Those last two are kind of overdone...but there's always room for more original interpretations, though I'd imagine most readers will be really engaged in something new or different. But then again, a tried-and-true story line with great execution is always appreciated, too

It's really a matter of execution on the part of the writer, combined with how the readers think if it works or not. Tried to be as general as possible while still having enough of an idea for everyone to pivot around. Hope that helps!
0 x

I don't write much but I do have a few ideas thats been rolling around in my brain. If I do decide to whats a good program to use thats free? I'm kinda torn tho. drawing makes me feel better but I'm getting so frustrated with my program that keeps crashing, and 1/2 feels like I'm starting over /doesn't make a difference cuz theres always something. cant even scan either. really wish i can give up but I'm so freaking stubborn and I feel like being back at work is gonna do me in.....well see.
1 x
Will work for bubble tea...despite needing money...

Jiesi wrote: If I do decide to whats a good program to use thats free?

There's Open Office, but it's kind of overkill (and I've never been a fan of it myself).

You can use Google Docs, which has a browser-based word processor. You can even download your document when you're ready to send: 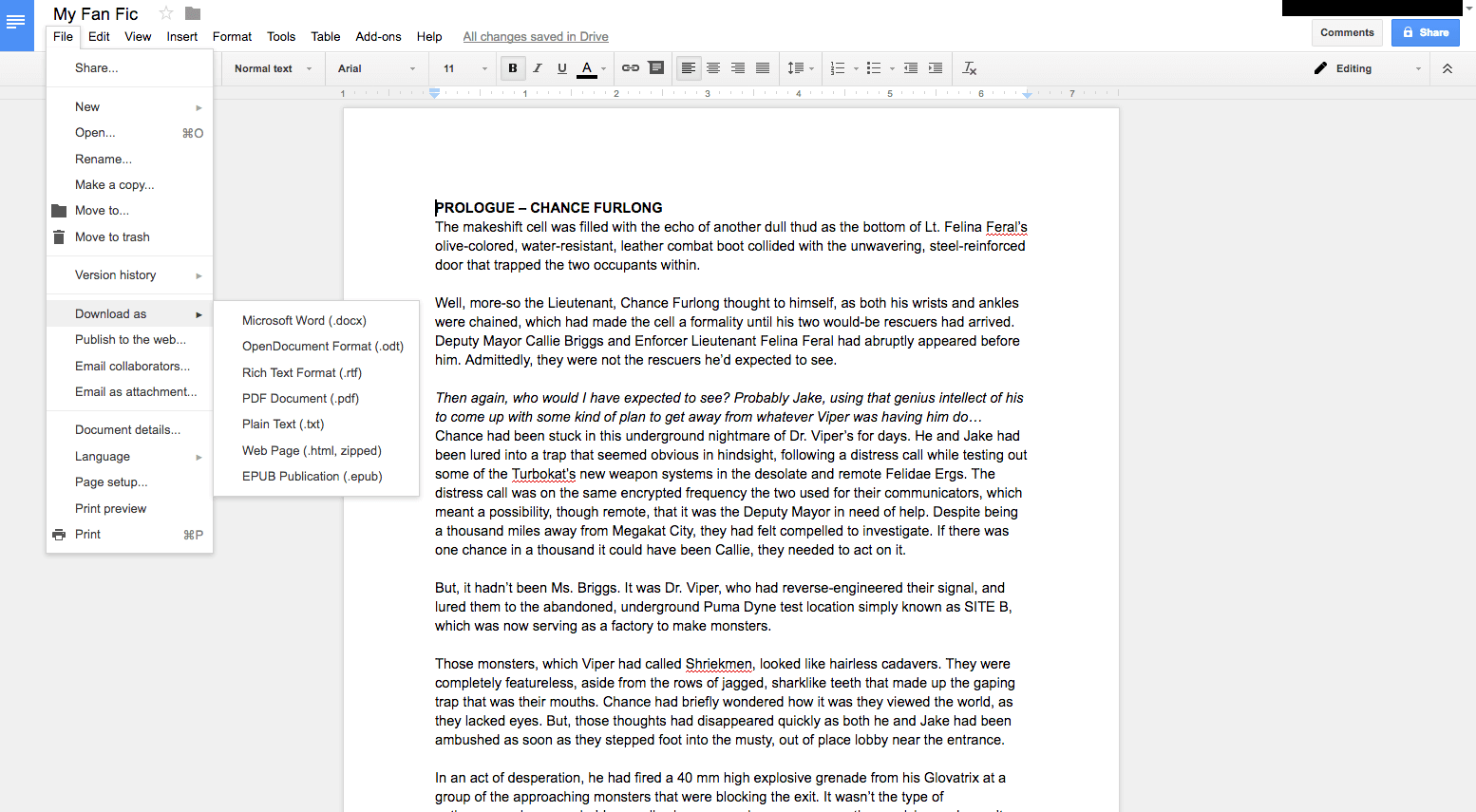 I have to vouch for Google docs... that's what I use for my comic scripts and such. It works over my Windows, Mac and IPhone without a problem.
2 x
My website: http://www.poecatcomix.com
Top

I use Open Office, so I hope you accept .odt files.
1 x
"Saturday is usually my morning to sleep in."
Top

MoDaD wrote:A more explicit example would be "What happened to Dr. Greenbox after the events of Unlikely Alloys," or "Where did the SWAT Kats hangar come from?

I did write a fanfic explaining what happened to Zyme after The Giant Bacteria (different from my current idea where he's scarred). However I don't think I can submit it for this challenge. For one thing, it has adult content (an edited version does exist on the fanfic archive, though), and for another, the fact it's already written means I'd have an unfair advantage over other participants.
2 x
R.I.P. Gary Owens (1936-2015)
Top

marklungo wrote:I use Open Office, so I hope you accept .odt files.

That's fine. As long as it's in some kind of textual format odds are I can open it. Though, if you use a word processor, it will help maintain formatting. Sometimes italics/bold and special characters don't always survive without a manual once-over. But, that's my problem to worry about, not yours

I'll be working on hosting submitted stories on the challenge page. Hoping to provide something similar to what I did for Mr. Goodkat's War Games for this.
2 x

It would suck if we had a couple of challengers who went after the same topic...I like a little variety in my life, after all, and I hate falling into the rut of "I'm doing the same thing someone else is doing..." Which is probably why I stopped writing novelizations and tackled other genres.

Should we declare our topic of interest here so as to avoid copykatting other folks?
1 x
Top
Post Reply
137 posts